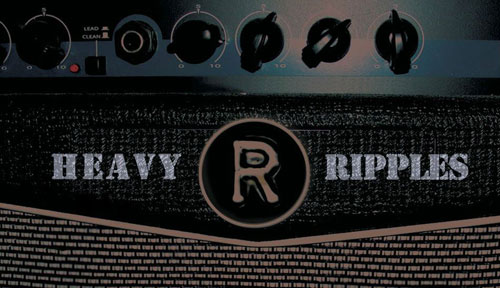 Five years in the making, Ripple Music is proud to announce the creation of Heavy Ripples Distro (heavyripples.bigcartel.com), the best new source to find LP’s, CD’s, 7″‘s, Tee’s, Magazines, and more from some of the most esteemed bands in the heavy underground.

Noting that the burgeoning underworld of bands pumping out stoner, doom, heavy psych and metal mania were horribly under-served by today’s current distribution system, Racer and Pope–the head honchos of the hard-rocking Label, Ripple Music– decided that something had to be done. Knowing that there were tons of excellent heavy bands that couldn’t get widespread distribution because they weren’t “hot enough” for some of the current heavy distributors, or not signed to a big enough label, Racer and Pope decided to put together a Distro that could benefit from the years of experience and channels they’d gained with Ripple Music.

And Heavy Ripples Distro was born.

Featuring heavy bands from North America, Europe, Australia, South America and beyond, HeavyRipples doesn’t discriminate against bands who may not move 100 copies or are self-produced and totally D.I.Y. The only criteria for HeavyRipples is that the bands rock- pure, unadulterated riff-mad heaviness. Utilizing a “bare minimum” fee strategy, Heavy Ripples Distro offers bands the opportunity to have their music distributed world-wide with the lowest possible fees, allowing the bands to recoup the greatest return on their music while getting maximum exposure and the opportunity to offer thei music to heavy rock fans at the best prices on the web. It’s an entirely new model for heavy music distribution and one HeavyRipples Distro hopes can maximize the viral spread of the heavy rock.

Recognizing the dedication Heavy Ripples Distro has to the underground scene, some of the leading Labels in heavy rock jumped at the chance to join in, with Labels like Cosmic Artifactz, Buried by Time and Dust, PsychDoomelic, and Ozium Records all offering the best of their heaviness.

And there’s more. HeavyRipples Distro is now the exclusive North American Distributor of Vincerebus Eruptum (www.vincebuseruptum.it), the world’s leading magazine devoted to the stoner, doom, and heavy psych rock scene. Produced in Italy, Vincerebus Eruptum brings interviews, features, news, and reviews of such heavy legends as Colour Haze, Uncle Acid and the Deadbeats Orchid, Kadavar, Witchraft, and more. All in a slick, full-color format and for only $7 per issue.

Check out Heavy Ripples Distro, the web’s leading site for the sounds of the true heavy rock underground – www.heavyripples.bigcartel.com.

For inquiries and band submissions, contact Racer at [email protected]

And find all the heaviness and daily deals at:
http://www.heavyripples.bigcartel.com
http://www.facebook.com/pages/Heavy-Ripples-Distribution/521859817852067