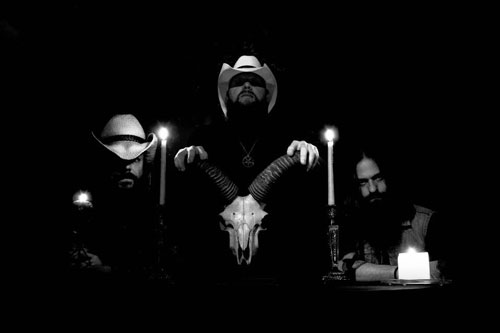 RIPPLE MUSIC is proud to announce the signing of acclaimed, hard-hitting American heavy rockers, VOLUME IV to their ever-expanding roster!

VOLUME IV is a unit that unleashes their mighty sonic attack with aplomb and a nasty sneer on their faces. Full of grit and no-nonsense rock, VOLUME IV pummel their listeners to a bloody pulp with a fierce combination of heavy groove, dirty melodies and that all important riff. Individually the members of VOLUME IV have shared the stage with legendary acts such as MOTORHEAD, IRON MAIDEN, DANZIG, MASTODON, CORROSION OF CONFORMITY and DOWN. Now, back in the studio, VOLUME IV is hard at work recording their RIPPLE MUSIC debut album, tentatively titled Long in the Tooth. Plowing the same massively heavy fields of 70’s/80’s classic hard rock that fueled their debut EP, VOLUME IV aim to build upon the crushing success of that first release and take their rocking brand of heaviness to a new level. And when the band describes themselves as “Loud Motherfuckers” you better bet that the new album will rock! Whatever title the new album takes, RIPPLE MUSIC is set to unleash the heaviness worldwide in 2014, as the band makes plans to tour and hopefully hit all the major heavy rock festivals.

VOLUME IV commented yesterday upon the new alliance; “Other than not signing us in the back of a limo over mounds of cocaine, we feel Ripple is one of the best labels going and we are proud to be part of the family!! It’s clear that these guys don’t compromise in terms of putting out creative music and are true believers of heavy rock. The variety of bands and the sheer quality of music they’ve released speaks for itself. We’re very honored that our music earned its place among their ranks!”

For the growing legions of Ripple fans, known as the Waveriders, VOLUME IV will be another must-hear addition to the ranks of bands that already include such heavy rockers as Mos Generator, Devil to Pay, Mothership, Trucker Diablo and Ape Machine. And you can bet that the combination of VOLUME IV and RIPPLE MUSIC will be a combustible mixture!
For an in-depth review of the band’s self-titled EP and stream of album track ‘Kong,’ visit this location.

Catch the mayhem that is VOLUME IV live:

“I really, really like the sound that Volume IV have gone for here as its heavy without any gimmicks, it’s just hard rock done by three guys who clearly love their craft. Go into this to remember why you started listening to rock and why you still love it today – then prepare to be transported back to those good days once again.” – Dave Nicholls, Loud Stuff.com
“Straight out of Walking Dead-land, Atlanta’s heavy hitters Volume IV unleash their filthy sonic attack with great aplomb and with a big sneer on their faces. Full of grit and no-nonsense they simply pummel their listeners to a bloody pulp. Opting at being a force instead of going for warp speed, the band build up their songs to end in a furious crescendo.” – Swedebeast, The Ripple Effect