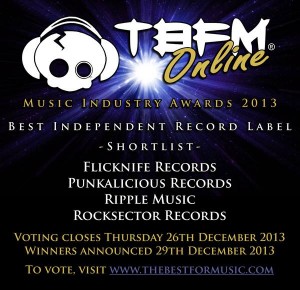 Ripple Music, the California-based heavy rock label has already been recognized as one of the world’s leading labels for 70s-tinged retro-heavy rock. With a roster that includes such hard-rocking stalwarts as Mothership, Trucker Diablo, Mos Generator, Grifter, Stone Axe, Devil to Pay, Ape Machine and Earthen Grave, (not to mention such 70s legends as Leaf Hound, Poobah and JPT Scare Band) Ripple has garnered accolades and appreciation by rock fans around the world, for their quality of music and love of both vinyl and CD formats. Now it’s time that the industry stood and took notice of what Ripple is doing.

With the announcement of their Industry Award nominations, TheBestForMusic.com made it official: Ripple Music is one of the best hard-rocking record labels out there! As part of their annual award issuing, Ripple Music was nominated along with 3 other excellent labels, for the “Best Independent Record Label.”

Ripple Music bands raked in the accolades also. Both Mothership and Trucker Diablo were nominated for Band of the Year (in UK and International divisions) and both of their latest Ripple releases, Mothership’s self-titled debut and Trucker’s Songs of Iron were nominated for “Best New Album of 2013.”  Trucker Diablo even got a nod for “Song of the Year” for their anthemic, hard rocking single, “Drive.”

You can vote for the final awards and see all the nominations at thebestformusic.com.  Please pop over there and vote for Ripple!

Stay tuned to Ripple Music for more chain-rattling heavy rock, as they prepare to unleash a maelstrom of heaviness in early 2014, including Leaf Hound’s hotly sought-after Live in Japan on vinyl/CD/DVD, Poobah’s 1976 classic US Rock and long-anticipated new albums from Grifter and Volume IV.