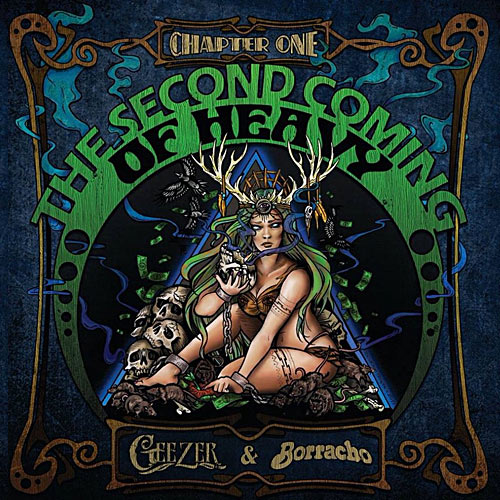 The seeds for what has become the first installment of a Ripple Music series of splits titled The Second Coming of Heavy would seem to lie in the label’s 2011 release Heavy Ripples (review here). While not nearly as ambitious in its title, that offering was a double 7″ that featured four bands — Stone Axe, Grifter, Mighty High and Sun Gods in Exile — who were intended to represent Ripple‘s view of the future of heavy rock, or at very least some underground bands who deserved the exposure that teaming up might bring them. As an opening chapter, The Second Coming of Heavy: Chapter One – The Risen has a loftier feel in terms of its aspirations but also takes a different, more pragmatic approach. It’s a 12″ instead of a double-7″, and it halves the number of acts involved perhaps in an effort to make the idea more sustainable, bringing together Washington D.C. riff-riders Borracho and New York heavy blues specialists Geezer.

Pressed in three separate editions of 100 copies each and set to release Saturday morning, the question as regards The Second Coming of Heavy isn’t whether or not the copies will go, but how fast. Borracho and Geezer are both fairly proven entities when it comes to moving units — the former having had vinyl for both of their full-lengths to date and the latter having seen their Gage LP gone more or less before the news was out about its release. I haven’t yet seen a full tracklisting made public for the 12″, and they also seem to be keeping the back cover a secret, but both bands have posted tracks in advance of the official arrival date, Borracho unveiling “Fight the Prophets” and Geezer getting loose with “Tonight.”