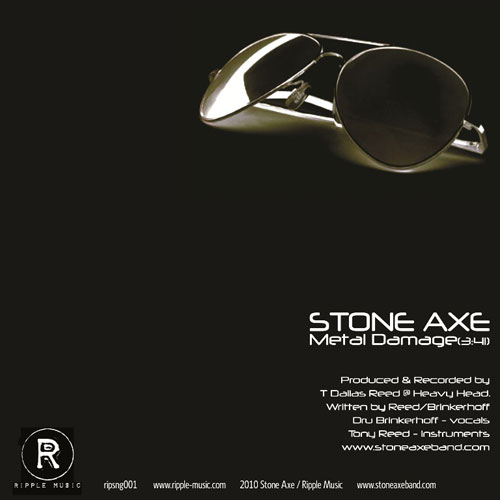 An instant classic in the realms of retro 70′s, stoner-rock sound . . . Stone Axe and Mighty High have teamed up to release a searing slab of guitar driven retro rock. Stone Axe have contributed “Metal Damage” while Mighty High have brought one their strongest efforts to the front in “Don’t Panic, It’s Organic.” This is a split single for the ages!

“Impossible not to crack an illegal smile when you hear this. Stone Axe are one of the best retro-metal acts around. Kiss might’ve sounded this good if they’d learned to play their instruments. There’s no one better than Mighty High at making fun of wretched metal excess. It’s priceless.” — Lucid Culture

“Stone Axe is pure old-school metal played with a power that is sadly rare these days. Will leave you lusting for more if an ounce of rock and roll spirit throbs in your veins. Mighty High kick off a stoned punk squall that sounds like Queens of the Stone Age playing Rancid Covers. Both tracks are well worth your time and money and it’s hard to imagine rock fans not wanting to track down at least one of the albums by these fantastic bands. Either way, with two bands of this quality on one release this is something of a must-have.”– Sonic Abuse

“Newcomers Ripple Music managed to get two highly explosive bands onto a 7″. Stone Axe’s “Metal Damage” has me thinking of pre-Stained class Judas Priest, the kind of mid-1970′s metal where band’s took their time and built up the sound with a steady boil of activity. Mighty High’s “Don’t panic it’s organic” is even better. The main riff is huge and dripping with 1970′s fuzzed out goodness. This is the perfect tune for playing about two minutes after 5:00 on a Friday. Both bands deliver the goods on this album.” — Metal Mark, Heavy Metal Time Machine

“Ripple Music have a gem on their hands. An awesome set of tunes. Stone Axe delivers the goods once again.“Metal Damage” is a throw back to classic Judas Priest from the later 70′s to early 80′s. The best duo around to preserving music from the 70′s. Mighty High really rock with their contribution “Don’t Panic It’s Organic,”a fast paced, almost punk-like rock song. Get yours today.” — The Soda Shop