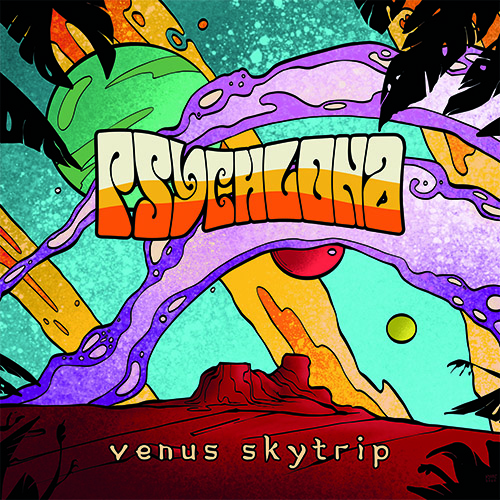 “10,000 Volts” takes off in its second half, pushing out out out until finally it recedes to end quiet, and from there the beast that is Venus Skytrip unfolds a succession of shorter pieces, with “Blow” (6:05) making its presence felt through a combinationPsychlona Venus Skytrip of earthbound chug and swing and airy vocal melody while the each-under-four-minutes pair of “Star” and “Edge of the Universe” seem set to motor full-on terrestrial desert-style until the latter winds up in atmospheric hypnosis for a stretch in its second half. They bring it back around — to their credit — but the journey’s a joy just the same, and more shifts between languid stoner vibes and massive volume play out through “Resin” and “Tijuana” seems to bring with it a new level of tonal fullness in following, so the band readily break out a series of tricks along the way before they get around to rounding out with “The Owl,” which fills the last nine minutes of Venus Skytrip with a purpose somewhere between heavy psychedelia and hard-edged stomp, at least until the riff builds into its crash just after five minutes in, the bass takes hold and leads into and out of the record’s last build, which like the thing itself, is a trip well worth taking. – The Obelisk