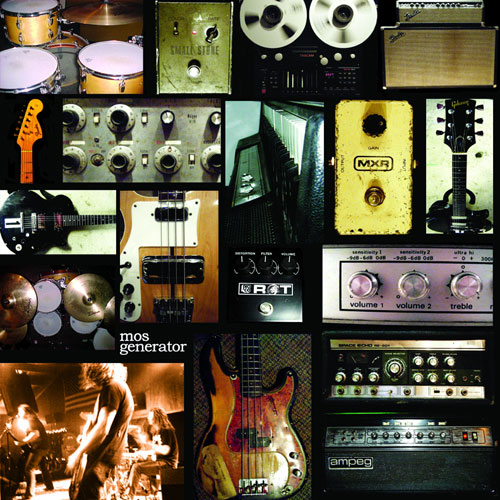 Gatefold LP featuring the remixed and re-mastered version of the album that started it all for Mos Generator. Also includes a CD with the entire album, as well as a previously unreleased track from the original recording sessions and the entire Live at the Manette concert. That’s not all, folks! This package also includes a download card that will allow you access to the entire album, all the CD bonus material and exclusive, never before heard demos, live cuts, and a half hour extended rehearsal jam! This 10th Anniversary Edition is a must have for any serious Mos Generator fan . . . or, even if you’re a first timer and want to know what the fuss is all about.

“All in all this is great stuff and this reissue belongs in everyone’s collection if you have the original versions or not. 4/5″ – The BCFM Sunday Rockshow

“The long experience and the timeless love for music pay in terms of technical skill and solid passion perceived in studio as well as in live tracks, that you’ll find in this new release. As with any juicy heavy rock band worth of such a tag, Mos Generator should be experienced live. Not for everybody, at least just for geographical reasons. However in the rich menu of the new release the wealth of live tracks, i.e. the «Live at the Manette» concert, helps in depicting the generous doses of spice and vibes added to the impeccably performed studio tracks during the band’s live exhibition taking place in the old days. 9/10″ – Doommantia

“The songs from the original album are amazing enough on their own. Yes, I could just say these tracks are high caliber groove-laden, 70′s inspired stoner rock and all that would be true. However that only scrapes the surface for how good this band really is/was even at this early stage of their career. Mos Generator live are perhaps even more spot on with hitting everything in fine fashion and just channeling their natural smoothness in this performance. Really a fantastic package all around. Once again Ripple Music not only delivers the goods, but they go the extra and exceed all my expectations on this one.” – Heavy Metal Time Machine

“Reed wears his influences on his sleeve not only in terms of what he plays but in the way he engineers his records – every instrument comes through CRYSTAL clear, there are no fancy studio frills or tricks, or the “wall of guitars” effect that is found on so much music deemed ‘heavy’ of late. To be sure, everyone in this band is playing loud and note-perfect through very cool old gear (the cover gives you a handy rundown of what they use!), but it’s the sheer energy and talent that has gone into writing the music that makes this record heavy.” – The Sleeping Shaman