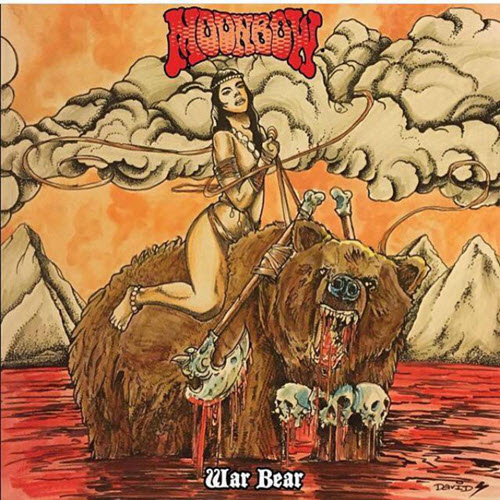 What do you get when you cross a BMX racer with Hank III, Valley of the Sun and Steve Earle? (No, not that Steve Earle…) In this case, you get Moonbow, an outfit formed by singer/biker Matt Bischoff and Hank III axeslinger David McElfresh. This is actually album number three from said ensemble, albeit with the previous two being independent releases, it’s the first one to cross my desk.

War Bear kicks off with the title track, a pretty decent mid-paced rocker with soaring, southern-style vocals singing about smokin’ and drinkin’ again. With about a minute to go, they throw in some Kentucky fiddle, just for the hell of it. “Sword in the Storm” comes off as a cross between Skynyrd and Mothership, while “Bloodwash” likely leans a bit more toward the latter. “Death of the Giants” displays a pretty decent Fu Manchu groove, with laidback, whiskey-soaked drawl overtop. I can dig it…

“California King” almost sounds like a Fu Manchu cover (as far as I know, it isn’t), before “The Road” mellows things out considerably on the verse, ultimately culminating in a riff-heavy chorus. This one actually employs some bluegrass banjo in its closing sequence, which kinda works, I guess. They do seem to mellow out and slow down toward the back end, with “Toward the Sun” closing things out on a thumping stoner-rock note. Would definitely give this one a few more spins. – Hellbound.ca

You can purchase this and more from the Ripple Music webstore at: https://ripplemusic.bandcamp.com/