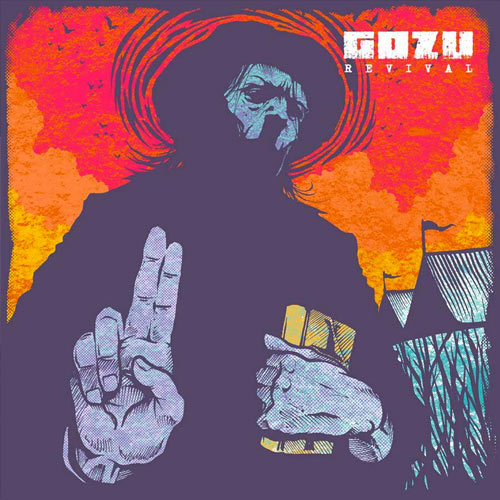 Damn, sometimes you just fall in love and fall hard. It happens, it’s a beautiful thing. You never expect it and are never looking for it in that moment and then all of the sudden twelve tons of love fall off the dump truck right on top of yours truly.

Boston’s own Gozu is that twelve ton dump truck and their third release Revival is all the love you can handle. How could that not be the case with a band named for a face-licking cow head in a low budget, absurdist yakuza movie? Well actually, I am glad you asked.

What we are dealing with here is eight songs that were properly assembled to interconnect and create what is the finest military-grade, ass shaking machine the western hemisphere has had the privilege to develop. Revival is a triumph of style, rockandroll, and diesel engineering.

First things first, Mark Gaffney’s vocals set the tone to the entire album. His delivery is fearless and he fits in each and every song with a precision that was probably reverse engineered with technology from alien spacecraft. It is that good that I question whether he really is one of us. Could this man who plays guitar and sings over these heavy riffs be from beyond? My research is inconclusive at this point. Listen to the fifth track Oldie and you be the judge.

The guitar work by Doug Sherman throughout the album is why we like what we like. Heavy, driving and when combined with the bombastic rhythm section of Joe Grotto on bass and Mike Hubbard on drums creates an unconscious reflexive motion of the head forward and backwards in a subtle to violent fashion in men and significant lateral swaying of the lower torso region in women. It’s science as you can see with the tracks Nature Boy, Big Casino, By Mennen, and in the anthem named for my doppelgänger, Lorenzo Llamas.

Their first album on the beloved Ripple Music label will be released on June 10th and will be on my list of favorites for the year.

With or without face licking, you are gonna love it.
– Album review by Heavy Planet