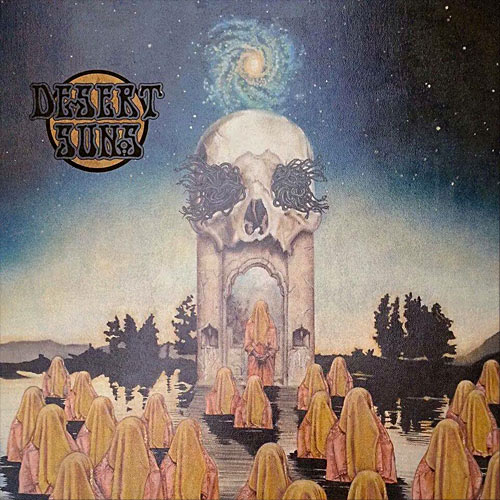 The third wave (?) or generation of Desert-driven Stoner Rock is now a well established reality for those of us “in the know” about such meaningful, relevant things. That fact could not be any more evident than it is on the recently re-released self-titled debut EP from San Diego’s Desert Suns as they channel the vibes of the greats like Fu Manchu and Nebula and then put it out there with their own intense originality intact. Well, that and a whole shit-ton of nearly immeasurable Psyche, Space, and Blues elements, the recipe resulting in this heavy-ass six pack of superb songs and thanks be to Ripple Music for having the good taste and right frame of mind to re-issue this magnificent masterpiece.

There’s enough of all of the aforementioned components here to provide Hard Rock fans a manageable dose of whatever they may like, be it the Doom-downed Psyche heaviness of opening cut “Burning Temples“, the high-octane hard hitting “Passing Through“, or the backwood Blues of “Ten Feet Down“. You get the fuzzed out drawl of “Memories Of Home” that comes across like the result of Alice Cooper starting a Stoner Rock band in the early Seventies and then there’s “Space Pussy“. I’m not even going into it, just go listen to it and the rest of this marvelous offering in the widget below..you won’t be sorry.
– From Metal nexus