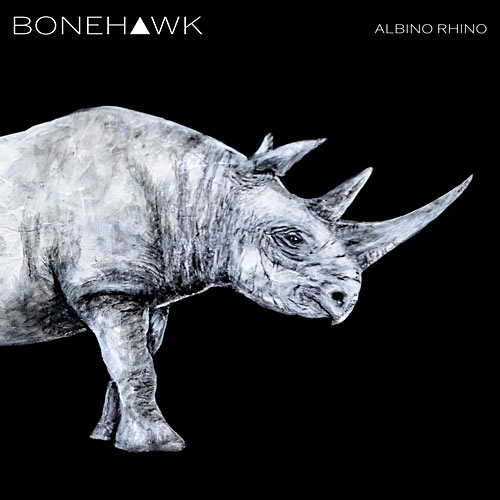 Near Kalamazoo, Michigan, USA – It all started in the 3rd grade. That’s when BoneHawk guitarist/vocalist, Matt Helt, and guitarist, Chad Houts, first met. Over the years, they bonded over video games, pizza, beautiful women, flatulence, and music. Helt was already an accomplished drummer, jamming to “Radar Love” and other classic rock jams in his basement when Houts got his first guitar at 14. Helt would sell his drum set not long after.

Forward four years. By this point, Houts, raised on a steady diet of thrash metal and heavy rock guitar, and rightly accomplished in that regard, enlisted Helt to play drums in a project. Helt had not played drums in the aforementioned four years, but he caught the bug quickly, and the rest, as they say, is history.

Around 2006, Helt and Houts formed Mesa with their friend Joel Wick (Quixote, Jihad) – quite a departure from their current (Helt and Houts were in a straight up, MC5-style band called Nobody’s Favorite, with Houts on bass) and former bands. The three decided they wanted to play something that paid homage to the heavy riffing they all dug in the early to mid-90s that was directly influenced by the mighty Black Sabbath. The band would only release one 7-inch platter on UFO Dictator Records before breaking up, at that point as a 4-piece, as Wick moved to Portland, Oregon.

The final Mesa line-up proved an impetus for BoneHawk in 2011. Helt and Houts envisioned combining Iron Maiden and Thin Lizzy-esque harmonies with the down to brass tacks heavy groove of Sabbath and Led Zeppelin and the twin guitar heaviness of Judas Priest and Kiss. They enlisted a former band mate from the distant past, Chris Voss, to nail the grooves down on bass. Initially they played as a three-piece with Helt on drums and vocals. They were horny to see what two guitars would sound like, so they enlisted a drummer for a year. Unfortunately, he did not work out, so the dudes decided to record their debut album as a three-piece, although with the twin guitar sound they had unleashed on audience for the previous year.

Not long after BoneHawk recorded “Albino Rhino,” they found Jay Rylander, a former guitarist in several bands, but who had by now taken a fancy to banging on drums for some while. Rylander fit right in and learned the whole album, solidifying the line-up in short time.

The band played a few packed shows locally in support of their record, but they were soon to find out a wider audience was taking note of “Albino Rhino.” In 2 months, the double LP had sold out its first pressing and bigger opportunities called. The band, now with Taylor Wallace (ex-Wilson) on bass, is ready to meet those opportunities head on, armed with a bullet belt full of riffs.

BoneHawk plays the only way they only know how to. They sometimes opt for massive riffs; sometimes thunderous brevity. Many songs have interludes of guitar harmonies or sparse bass/drum riffing. But it all comes from the gut. Can you dig it?