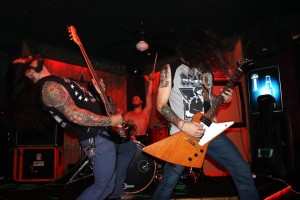 You could feel it coming. The excitement was palpable as Mothership took the stage on Day 1 of the first annual Metroplex Heavyfest in Dallas. Hometown boys and hometown crowd and the atmosphere was electric!

To say Mothership decimated the audience that night would be an understatement. Between Kyle Juett’s “Lemmy-biker toughness” on bass and vocals, younger brother, Kelley Juett’s “Rory Gallagher meets Brian Robertson” guitar magic, and Judge Smith’s propulsive drums, the audience’s fists never stopped pumping and the head’s never stopped bobbing. An encore call of “Ace of Spades” with legendary Dave Sherman (Earthride/Spirit Caravan) on vocals was all it took to shoot the collective audience over the top.

Ripple Music is chuffed to announce the signing of 70’s-tinged U.S. hard rock band, Mothership, for a two album deal that will start with the world-wide release of the band’s self-titled debut. Expect to see this raging slab of incendiary hard rock on CD, digital, and never-before released vinyl early in 2013 on Ripple Music.

Mothership was formed in 2010 by hard-rock loving brothers, Kyle and Kelley Juett, infused by a love of all that is retro-heavy from years of influence under their father John’s record collection. Originally bereft of a drummer, father John learned how to play and filled in for practice and gigs until permanent skin pounder Judge Smith took over the drummer’s throne. Since then, there’s been no looking back. Already one of Texas’s hottest live bands, word of the Mothership’s rock and roll prowess has leaked far across the country and is already gathering steam in Europe. With a sound that satisfies like a steaming hot stew of UFO and Iron Maiden, blended with the southern swagger of Molly Hatchet and ZZ Top, Mothership’s goal from the beginning has been to carry on the tradition of the classic rock style of the ’70’s, updated and amped up for the modern day. That hard-rocking sound is filled out by the true legend-in-the-making axeman, Kelley Juett, who seamlessly builds upon guitar heroes of the past with his own fiery licks.

Having already shared the stage with such revered bands as Prong, Red Fang, Lo-Pan, Dixie Witch, Venomous Maximus, and Wo Fat, their 2012 self-released debut was brought to the attention of Ripple Music who instantly knew this was a band to reckon with. One ingestion of their combustible live show at the Metroplex Heavyfest convinced Ripple that a partnership was inevitable After a family dinner of Italian cuisine, beer and whiskey, both Label and band knew they’d found kindred brothers.

Ripple will re-release Mothership’s debut album on CD and 12” vinyl, including an extremely limited run of 100 multi-colored, splattered 12” with autographed posters. The album also features the production, mastering, and guest guitar contributions of Kent Stump from Texas heavy rock heroes, Wo Fat.

Texas is famous for its hard rock. Mothership is the next step in that legendary lineage. Get ready to jump aboard the Mothership for an overdose of vintage hard rock!

“Been listening to Mothership all day now and if feels like UFO and Orange Goblin got drunk with St. Vitus, smoked some weed with Blue Cheer and spewed out the tuffest blues-drenched, no frills love child I’ve heard all month. Some ridiculously badass guitars. And heavy above all else!” — Sword of Doom