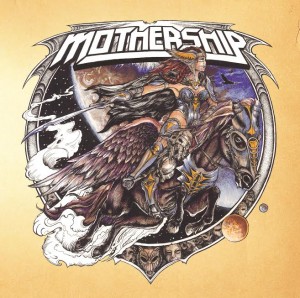 Ripple Music and Dallas, Texas-based riffers Mothership are excited to finally reveal the details of Mothership’s highly anticipated second release, Mothership II. After months of playing their new tunes to sweaty, ecstatic masses both in Europe and on across the United States, the trio is excited for fans to finally hear the album in its entirety. For the album art, the band chose good friend and incredibly talented artist Zach “EZ” Nelson (Instagram – @ezwheelin) to hand draw his version of the galactic Valkyrie who also appeared in another form on the cover of the band’s debut album. For the album’s engineering, Mothership returned to Kent Stump of Wo Fat, who also lent his magic to the group’s eponymous debut album, at Dallas’ Crystal Clear Studios. Mothership II will be released on single LP gatefold vinyl and on digipack CD.RELEASE DATES:

The CD will have two bonus songs:

Supersonic intergalactic heavy rock trio Mothership based out of Dallas, Texas give a real sense of hope that all is well in the universe, and that pure honest rock and roll has once again returned to this planet on a mission to unite true believers. Consisting of brothers Kyle Juett on bass/lead vocals, Kelley Juett on guitar/vocals, and Judge Smith on drums, these guys have created a unique sound that satisfies like a steaming hot stew of UFO and Iron Maiden, blended with the southern swagger of Molly Hatchet and ZZ Top, paired with a deadly chalice of Black Sabbath. Mothership’s goal from the beginning has been to carry on the tradition of the classic rock style of the ’70′s, updated and amped up for the modern day. The band has been non-stop road warriors since the release of their debut album in February 2013 on Ripple Music successfully invading the United States, Canada, United Kingdom and Europe playing either on festival stages, night clubs, or outdoors under the sun at motorcycle parties.

The band is set to release their sophomore album, Mothership II, in November 2014 on Ripple Music, and one can only expect more of the same unrelenting onslaught of heavy riffs, head-banging grooves, and mind-melting solos. This heavy rock juggernaut has only just begun their tear across the universal cosmos and have no plans of ever slowing down. Do not miss your chance to hop on board and join Mothership.