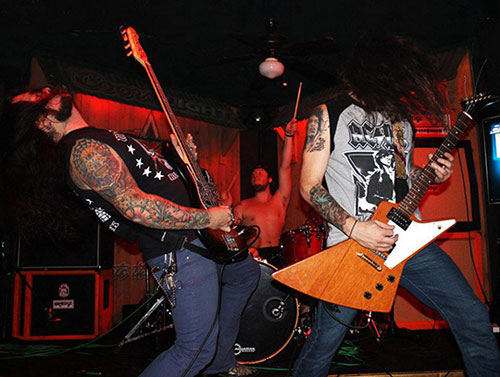 The Dallas, Texas-based trio of heavy rock bad asses known as MOTHERSHIP is about to make a return the road for a brief run with psychedelic doomsters COMMUNION.

Those who missed out on the band’s Spring run with GYPSYHAWK now have a second chance to experience some no-frills rock n’ roll magic when MOTHERSHIP kicks off their Summer tour on June 24th at Hotel Vegas in Austin, TX. This run will include a June 28th stop in Trabuco Canyon, CA for Show Class Magazine’s Born Free 5 Festival People’s Champ Party. Details for Born Free 5 and the pre-party can be found at the following links: 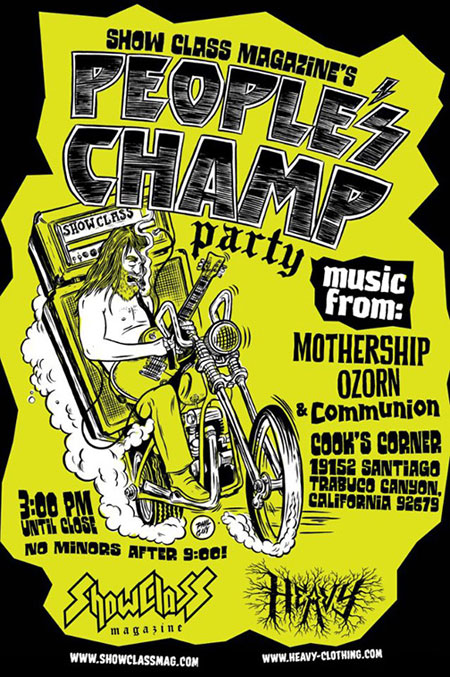 In other news, the song “Lunar Master,” off of MOTHERSHIP’s self-titled debut, has been ranked #3 on The Paranoid Hitsophrenic ‘Regular Old Doom Charts.’ Check out the rankings, which includes a link to a stream of the track, at this location.

With their self-titled debut, MOTHERSHIP masterfully delivers 70’s-tinged U.S. hard rock with a sound that satisfies like a steaming hot stew of UFO and Iron Maiden, blended with the southern swagger of Molly Hatchet and ZZ Top, MOTHERSHIP’s goal from the beginning has been to carry on the tradition of the classic rock style; updated and amped up for the modern day. Originally self-released in 2012, MOTHERSHIP and Ripple Music have joined forces to re-release this stunning debut record on CD and LP. Mothership is available at www.ripple-music.com.

“Been listening to Mothership all day now and if feels like UFO and Orange Goblin got drunk with St. Vitus, smoked some weed with Blue Cheer and spewed out the tuffest blues-drenched, no frills love child I’ve heard all month. Some ridiculously badass guitars. And heavy above all else!” — Sword of Doom

“Try to resist a band that plays blues-laden metal with heavy guitar riffs that is also hoping for intergalactic travel. Mothership is a three piece from Dallas that alternates between an almost AC/DC-like sound on a track like ‘City Nights’ and a broader, heavier and more epic sound on tracks like ‘Cosmic Rain,’ ‘Angel of Death’ and the opener, ‘Hallucination.‘
— VueWeekly.com

Rock n’ Roll history is rife with brothers working together to create their artistic vision. But rarely do we hear about a full-fledged family unit embarking down the treacherous path of a musical career. In the case of Texas based Mothership, the Brother Juett (Kyle on bass, younger brother Kelley on guitar) enlisted the aid of their father, John Juett, to help get the ‘ship off the ground. Raised on a healthy dose of their father’s 70’s-era record collection, the brothers began crafting songs fueled on the raucous and raw good time vibe when music seemed to know no bounds. Lifting off the pad for the first time in 2010, the band began to gain momentum and notoriety with their unabashed live shows. Knowing that the service of the family patriarch was temporary, Father Juett actively helped his boys find his replacement, and in late 2011, enter the mighty Judge Smith to hammer away on the skins. In early 2012, Mothership entered Crystal Clear Studios with Wo Fat mastermind Kent Stump manning the boards and by mid-year, the band self-released their debut album. It was the combination of the 70’s-era heavy rock fuzz and fury mixed with the blistering guitar solos of the NWOBHM-era that drew the bands attention to California-based Heavy Rock label, Ripple Music. In the waning months of 2012, after a successful year of traveling regionally throughout Texas and opening for national acts such as Prong, Red Fang, Gypsyhawk, Earthen Grave, and Lo-Pan, Mothership officially dubbed Ripple Music as its Home Port and began plotting a course for their first U.S. Tour in early 2013.