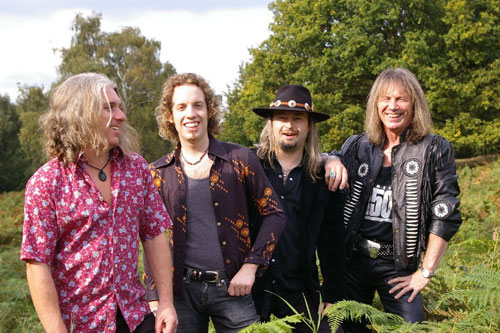 And now the band’s equally legendary frontman, Pete French, and the rest of LEAF HOUND has joined forces with Ripple Music to release an LP, CD, DVD project of all newly recorded live material – Live in Japan.

Recorded live in July of 2012 in Tokyo, Live in Japan will see worldwide release later this year via Ripple Music. Look out world, LEAF HOUND has been unleashed once again!

“As good a rock album as you could hope to hear. (LEAF HOUND, ‘Unleashed’)”
-Alastair Riddell, Kerrang!

Few bands from the proto-metal period command the undying respect and nods of approval as does Leaf Hound. Talk about a pedigree. Leaf Hound formed in 1969 under their original name, Black Cat Bones. Early incarnations of the Black Cat Bones featured guitarist Paul Kossoff and drummer Simon Kirke who both left to form Free. Black Cat Bones issued one album then replaced their vocalist with perfect-wailer Peter French, Guitarist Rod Price departed soon after to join Foghat and French added his cousin Mick Halls on guitar. With that change, Leaf Hound was born.

In 1970, Leaf Hound released the seminal album “Growers of Mushrooms” which has rightly been hailed as a bonafide classic of 70’s British underground rock scene. Classic Rock magazine has raved that “Growers of Mushrooms” is one of the most influential pieces of music on the stoner rock, and the album has gained a reputation as being one of the true lost gems of the early British hard rock scene. Original Decca vinyl copies on are one of the most rare collectable rock albums out there with prices soaring above £4,000!

After the band broke up, Peter French found himself in high demand. He has been the voice of Atomic Rooster, Cactus and Randy Pie as well as releasing an acclaimed solo album on Polydor, ‘Ducks In Flight’, which featured the likes of Micky Moody, Brian Robertson and Kenny Jones. But the legend of Leaf Hound wouldn’t die. Interest in the band took a seismic shift when the album was first re-released on CD in 1994, finally giving rock fans easy access to the buried treasure. It gained a second re-release in 2005. The music is a prime slice of classic 70’s hard rock – a heady mix of Cream, The Who, Free, Black Sabbath and Led Zeppelin.

Following intense public demand, Pete French put a new version of Leaf Hound together in the Spring of 2004, and in 2007 Leaf Hound released their first new album in decades, ‘Unleashed’ on the R.A.R.E/Repertoire label to highly positive critical acclaim. The opening track, ‘105 Degrees’, was voted one of the top 100 rock tracks of 2007 by Classic Rock magazine. To launch the release of the album, they headlined the second night of the All Hallows Festival at London’s Camden Underworld.

Now, the next chapter in the myth that is Leaf Hound unfolds as the band has joined the stalwart heavy rocking label, Ripple Music to unleash an all new set of killer live Leaf Hound onto the unsuspecting public. Soon to be released on LP, CD and DVD formats, Ripple Music will bring to a whole new audience the legend that is Leaf Hound. With a roster of classic proto-metal rockers that includes Poobah, JPT Scare Band, and Iron Claw, Ripple Music has already proven its ability to bring classic rocking bands to a modern audience.