Scotland’s Proto-Metal pioneers, Iron Claw, return with a long-awaited album of gritty, blues-based melodic heavy rock that is already garnering album of the year accolades from the press. The thirteen track album, A Different Game, is scheduled for UK release through Code 7 Distribution on October 3rd and world-wide release on October 4th, and is already available at the label’s web store.

To kick off the bands rampant live attack, they’ve volunteered their services to a charitable cause. On September 25th at 7:00pm, Iron Claw will perform at Comlongon Rocks, which will assist Cash For Kids and Cancer Research UK. This festival, which features and highlights local talent, will run from noon to midnight and will include 22 bands and 6 DJs . . . all for a mere £10! For more information, please follow the link: (http://www.comlongonrocks.com/)

Iron Claw will also be performing at the Barlinnie Prison in Glasgow, Scotland on October 5th, and will act as more than just a CD release event. The performance is sponsored by Governor Derek McGill to help show the prisoners that there are healthier alternatives to crime, such as playing and creating emotionally stimulating music.

A Different Game has been receiving airplay all over the globe, specifically the lead single, “What Love Left”. Huge supporters have come from the likes of Classic Rock Radio.eu, Get Ready To Rock! Radio, Planet Rock, SuperestacionMetal, and SineFM to name but a few, and Iron Claw are now one of the featured bands on the Screaming Singles, Vol. 1 compilation disc released through Nasty Casty Records.

Here’s what the press has to say:

“They have taken all their musical experience and rolled it up into an album which simply rocks. If you dig the roots of heavy metal, 70’s hard rock and Southern Rock, you will indeed enjoy listening to these experienced masters of Rock N Roll.” — ThrashHead

“This is pure muscle at work and Iron Claw still has plenty of the natural juice in them to make this reunion endeavor soar . . . thankfully Iron Claw has given themselves the opportunity to say a thundering hello to the rock world, if not hijack it.”  —  Ray Van Horn, Jr., The Metal Minute

“This is a solid, dynamic, vintage rock ‘n roll record, 13 tracks spanning 57 minutes yet hardly a dull moment to be found. A Different Game is more of the same—high quality heavy rock unearthed from the underground” — Hellbound.ca 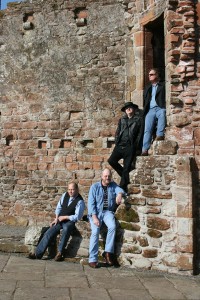