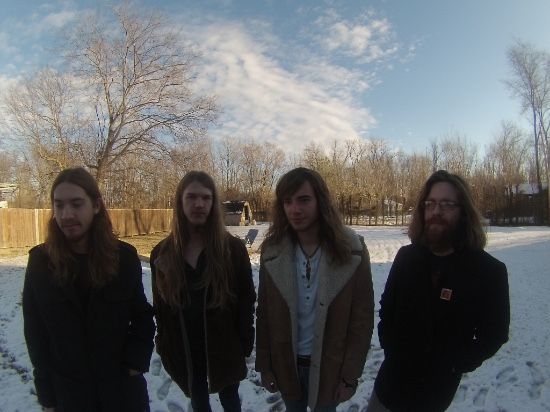 “The Judge kicks ass. It kicks ass in a 70s hard rock way. This is like the lost classic that has just resurfaced today.”
The Evil Engineer

Originally formed in 2010 by longtime friends Dylan Jarrett and Evan Anderson, The Judge is a hard rock quartet of impeccable vintage, formed in the fittingly named stronghold of Granite City, Illinois.

After the band’s initial incarnation as Unfallen – with Jarrett on guitar and Anderson on drums – the duo quickly became a trio for a period, touring music venues across the St. Louis area with new member Kevin Jones taking up bass and vocal duties. Increasingly influenced however by the Britannic rock majesty of groups such as Black Sabbath and Led Zeppelin, and with it that unshakeable ‘band of brothers mentality’, in 2013 the trio finally discovered the missing piece of a puzzle with the addition of their very own enigmatic front man, Tyler Swope.

As a criminally young quartet happily graduating from the riffs of old, Jarrett and Anderson started to uncover a new wave of hard rock acts occupying radio waves and record store shelves. Music by the likes of Graveyard and Kadavar helped inspire The Judge to develop their own special breed of slow burning psychedelia and sonic stew of traditional classic rock’n’roll and heavy backroom blues. The result of which can be heard on their only release to date, The Judge EP put out back in 2014 as a free download and filled with early versions and demos of songs found on this, their brand new self-titled album on Ripple Music.

The Judge hit the road over coming weeks across the US in support of their new album, which will be released on 22nd July 2016 via Ripple Music on CD, digital download and limited edition vinyl. For the full list of dates see below and stream and share the new song ‘The Witcher’ by The Judge here: https://soundcloud.com/ripple-music/the-judge-the-witcher
The Judge: