“Our new song, “Can’t Escape The Evil”, has been around in riff form since the early days of the band but we held off putting it on the last couple records because we wanted to make it the cornerstone of an album,” says guitarist Mat Davis. “When we finished writing “Can’t Escape the Evil”, it quickly became the centerpiece for the new record, Deal Thy Fate, and set the tone for the rest of the album.”

Written over the course of the past year in Joshua Tree, CA’s Mojave Desert, Deal Thy Fatefeatures 9 towering tracks woven with tales of folklore, dark Americana, serial killers and cult leaders. Building on the stripped-down sound of its predecessor, Deal Thy Fate sees CASTLEcontinue to push the envelope of classic heavy metal, crafting epic and memorable songs that hearken back to fuzzier times while keeping the pedal down on their own hard-edged, modern sound. Guitarist Mat Davis’ penchant for riffs that worm their way into your brain and singer/bassist Liz Blackwell’s haunted melodies soar out of the depths across the album’s 36 fist-banging minutes. The album’s striking cover art, inked by Patrick Zoller, reflects the title track’s no compromise, choose-your-own destiny rally cry. 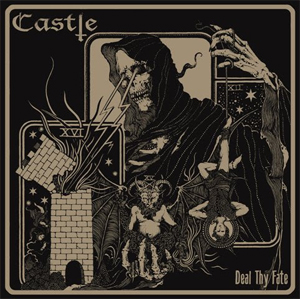 CASTLE has announced a run of North American tour dates in support of Deal Thy Fate. The band will launch a Canadian tour run on September 27 and will follow with a two week west coast trek in November/December. The just-announced live dates are as follows: