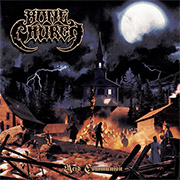 BONE CHURCH’s new album ‘Acid Communion’ is an intense, proto-metal journey through a colonial era New England village, rife with the evils of witchcraft. The album tells tales of downtrodden townsfolk, suffering at the hands of a satanic cult. All under the omnipresent eye of the local church. The Bone Church. A heavy, blues-laden tale of sonic folklore.

BONE CHURCH is a heavy Rock & Roll band from New Haven, Connecticut. Formed in 2016, they’re primarily influenced by the era when rock was transforming into the earliest forms of heavy metal, but still had its feet planted in the blues. Their sonic foundation is built upon that of classic bands like Black Sabbath, Led Zeppelin, Peter Green’s Fleetwood Mac and The Jimi Hendrix Experience; with elements of doom, metal, and psychedelia incorporated to complete their sound.