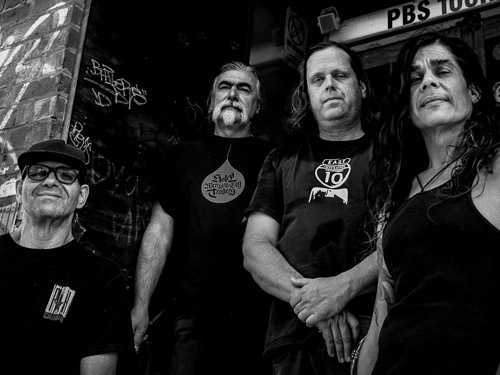 Influenced by everything from the psychedelic to the folkloric, jazz, hard rock, roots punk, world music- while hard to describe, one could say the sound and mood of Yawning Man is visual and cinematic , heavy and melancholy, driving & daydreamy…

Yawning Man, who hail from the arid desert area of Southern California, have been playing, jamming, and recording since 1986, and are a highly influential band. Most of their fans and those heavily influenced by them consider them to be ‘the originators’ of the entire “Desert Rock” movement/genre.

“Yawning Man was the sickest desert band of all time. Oh, they’re the GREATEST band I’ve ever seen.- Brant Bjork (2002)

Brant was a member of the later formed, but also highly influential hard rock/desert rock band Kyuss, and the Yawning Man song “Catamaran” was covered and included on their 4th album “And The Circus Leaves Town”. Countless bands, many hailing from the same Desert turf the band was bred from, and even more, spanning not only the US, but Europe and farther even yet, have been influenced by Yawning Man.

It would be almost 20 years after the band’s organic beginnings that the public would be blessed with a full length LP, “Rock Formations”, released in 2006 (Gary Arce on guitars, Alfredo Hernandez on drums and Mario Lalli on Bass). Other releases from the band include the Ep “Pot Head” with the addition of fellow desert musician Billy Cordell on Bass. “Vista Point” contains both of the aforementioned albums on one disc, and was released in 2008 to appease the rabid fans who were unable to pay the hefty prices for what limited copies of the first two albums existed. 2011 saw the release of “Nomadic Pursuits”, a brilliant album consistent with their style and flair, yet fresh and intriguing as ever.

Throughout the instrumental cinematic rock landscapes of Yawning Man, the post-Ventures haunting melodies & composition of guitarist Gary Arce are constantly being stretched, up-ended and sent deep into dark Joy Division territory, by the weird chords and heavy bass grooves of Mario Lalli and drummer Bill Stinson. The result is the kind of brooding and thunderous atmosphere that draws you constantly inward.

Their latest album, ‘Historical Graffiti’ is a very special recording session done during the band’s 2015 South American tour while in Buenos Aires, Argentina. They were invited to record for one evening at the world famous, legendary ION studios.
Yawning Man still tours Europe at least once yearly, but played some great shows in the US and Canada recently. After having enjoyed the success of those gigs, they plan on making a bigger, more inclusive tour of North America next time around.

Yawning Man still is going strong, driven by that which initially inspired the original members thereof to begin this never ending journey, which was/is/will always be to create and connect landscapes of the real to surreal. The dreams to the drastic. The end and on-going result being the beautiful, swirling and other-worldly music you know as Yawning Man. And then some.
*Credit to JJ Koczan for his portion of this biography