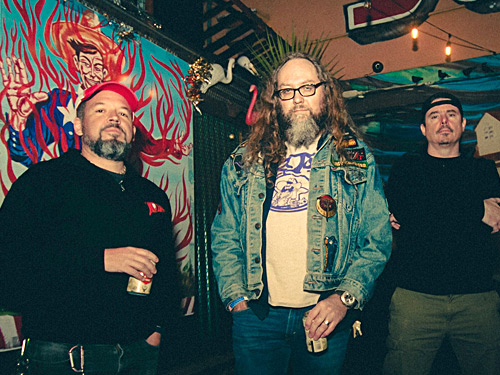 After over 10 years of slinging their Texas-sized psychedelic blues doom, Dallas-based Wo Fat is going stronger and rocking harder than ever, promising to continue on their swampadelic visionquest of overdriven, fuzz-laden riffage and jazz-minded jam explorations with the next chapter, entitled Midnight Cometh, looming on the horizon.

Throughout their sonic odyssey of five studio albums, a live album, and two splits, beginning with The Gathering Dark in 2006, they have stayed true to the deep, dark blues that wails from within and have continually forged their riffs with a primal grooviness, giving them a consistency of style. But just as notable is their willingness to survey unflinchingly the outer edges of trippiness on the ledge of one footpath only to make a tight turn and trample full on with monolithic heaviness down another.

2009’s Psychedelonaut really began to solidify the Wo Fat name in the Stoner Rock world, garnering them wider critical recognition, leading to releases with Nasoni and Totem Cat Records which, in turn, led to their two most critically acclaimed releases to date, The Black Code (2013) and The Conjuring (2014,) both released on the iconic stoner rock label, Small Stone Records, with The Conjuring landing on NPR’s “Top Ten Metal Albums of 2014” list, among numerous other “best of” lists. Each Small Stone release helped to elevate the reputation of the band by both mass and media as soulful practitioners of sonic alchemic wizardry – seamlessly brewing heavy riff-rock, blues, metal and psychedelia together with a jazz insight for improvisation and purposeful jamming.

One reviewer (yourlastrites.com) aptly described their music this way: “It’s hard to know where to place The Conjuring along the stoner spectrum because it’s metal heavy, but it rolls like rock.” The critical success of these recordings and the band’s ability to slay live has landed Wo Fat appearances at the legendary Roadburn Festival, Desertfest, Freak Valley Festival, Psycho California Festival and Sylak Open Air Festival as parts of a number of successful international tours.

For the release of Midnight Cometh, the newest slab of riffage lurking in your future, which is easily their most daring psychotropic exploration of heaviness to date, Wo Fat has teamed up with a label on the rise, Ripple Records, who have proven themselves to be Brothers in the Riff by peddling some of the finest of the new fuzz. With voodoo drums beating and endless waves of molten, blues-drenched guitar riffery, Wo Fat carries on their tradition of keeping things heavy and fuzzy, but also groovy, which all too often is the missing element in so much modern heavy music.

You can hear the echoes of field hollers and that oft forgotten “way back yonder funk” fueling the fire burning deep in the swamp at the witching hour. You can feel the rush of living on the edge and glimpse a phantasmal Coltrane in your peripheral vision while they careen through improvisational jams. And all this with an unrelenting metal heaviness that underscores apocalyptic lyrics that conjure visions of the end of an age, (our age?), black midnight bargains, summoned demons, the unquenchable cravings of avarice, ill-fated alliances and the consequences reaped.

Midnight Cometh was released Spring 2016 and was supported by a European tour with appearances at Hellfest, Desertfest Berlin and Desertfest London.