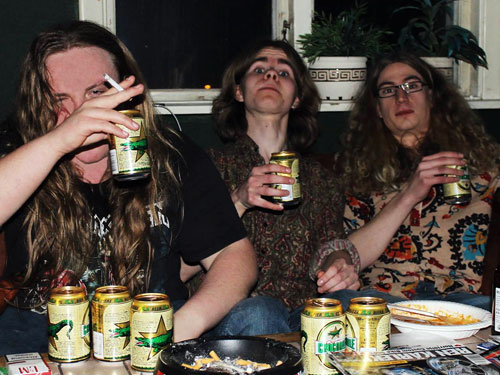 It actually all started back in 2011 when Filip, Emil and Charlie met in seventh grade and formed ILLUSION, inspired by swedish 1970s trio NOVEMBER. But then in 2015 things went south and the band was retired. For long they talked about forming a similar band in a heavier direction this time. They all loved Sabbath and the 70s sound, But Andersson was more of the 80’s metal guy and Rangstedt was more of the 60’s/70’s psychadelic guy. The result, combining 70s Doom like Sabbath, with early NWOBHM like Judas Priest’s first albums, and early 80s doom/NWOBHM like Angel Witch and Witchfinder General etc.

Then, finally in the end of high school together, In late 16’ early 17’ WITCHERS CREED was born. First week upon the release of their first EP they got huge response all over the world. With in 2 months and 2 EPs they got an offer to play a Stoner festival in Ukraine, and a few record labels were interested. They have played with bands like HYPNOS, and after that they went on doing several club gigs opening for bands and such.

But they knew they could sound better. So in december of 17’ they recruited a friend they knew from before when searching members for ILLUSION, Emil Lundin from Nyköping, Who had a bestial rocking voice. The first week of January 2018 they hit the legendairy SUNLIGHT STUDIO (ENTOMBED, DISMEMBER, HELLACOPTERS, AMON AMARTH) the cradle of the swedish death metal sound,
to record their debut album. And they’ve been rocking that path ever since!