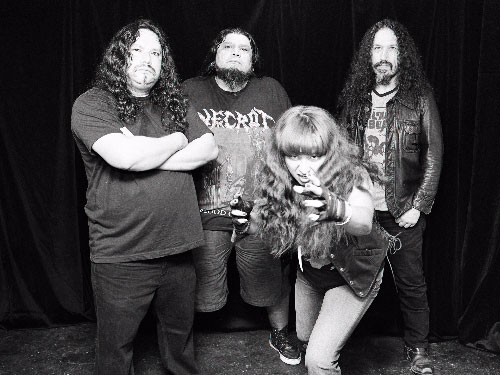 WITCHCRYER are based in Austin, Texas, Witchcryer was created by guitarist Jason Muxlow during his time with Chicago doom band, Earthen Grave (Ripple Music). Javi Moctezuma joined in 2015 and later that year, Suzy Bravo (Hogbitch) and Marilyn (Pillcrusher/Las Cruces) joined. “The Preying Kind” demo was recorded and released as a demo on bandcamp. In May 2017, the full length album, “Cry Witch” was pressed and sold as an independent limited cd and digital Bandcamp release. Reviews noted “this Austin band is definitely going places,” (Doomed and Stoned) and, “if I owned a label I wouldn’t be able to sign this band fast enough” (Thy Demons Be Scribblin).

Witchcryer played its first show on April 2016. Live, the band has been described as an “onslaught” and “revelatory” with Bravo singled out as “a powerful and amazing stage presence” (Negalithic) and “my new favorite female vocalist” (Desert Drowning).

Witchcryer’s debut album, “Cry Witch” was released in May 2017. Nine songs of classic doom, produced by the band & BRANT SANKEY (recording & mix engineer), the album has already been called “without a doubt, one of the best releases of the month of May” (Doombringer BR).