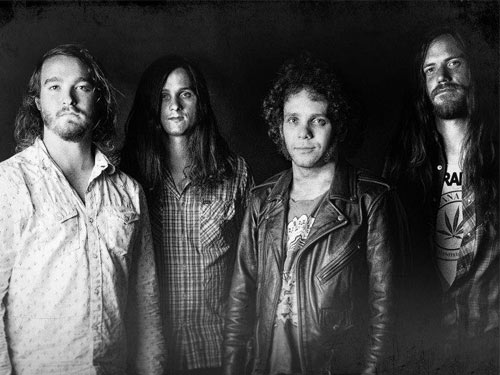 The Flying Eyes are a heavy, psychedelic rock band hailing from Baltimore, Maryland. Their name comes from a 1962 science fiction novel about giant, disembodied eyes that descend from outer space to control humanity…

Since forming, they have played support gigs for bands such as Dead Meadow, The Raveonettes, The Black Angels, Ariel Pink’s Haunted Graffiti and Dan Auerbach among many others. They also founded and hosted Farm Fest, a DIY music festival in the Maryland countryside that ran for 6 years. The last Farm Fest in 2012 featured Black Moth Super Rainbow, Celebration and White Hills, drawing over 800 fans.

In July 2013, The Flying Eyes released their third album “Lowlands” (produced by Rob Girardi and mixed by Chris “Frenchie” Smith), which was paid for entirely by the support of their fans through Kickstarter. They supported the record with a 52 date headlining tour of Europe and closed out the year with a one off performance in India at the Synchronicity Festival.