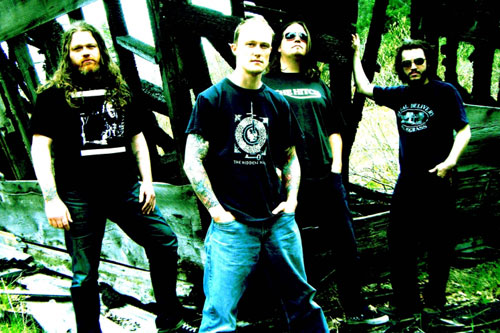 Born in 2007 in Port Orchard, Washington, at the hands of multi-instrumentalist T. Dallas Reed, whose prior outfit Mos Generator was beginning to follow a direction that no longer fit the band, as soon as there was a Stone Axe, there was a purpose, a reason for its being. Seventies rock preservation. Stone Axe was made and continues to flourish solely to honor the forefathers of true heavy rock and roll.

Think of Free, think of Thin Lizzy, the glory days of the power trio. The earliest days of Judas Priest, Ozzy Osbourne, Iron Maiden, Foghat, and AC/DC. Reed brings not only these sounds, but the spirit that birthed them, to life with vibrancy that, quite frankly, makes the current crop of “retro” acts with goofy hair and tight pants look silly.

Because it’s not about fashion. It’s not about overanalyzing or trying to follow this or that trend. It’s about the spirit of rock and roll, the spirit of creation. Stone Axe makes organically grown, passionately harvested classic rock and roll. You can hear it in Reed’s guitar, or in the swaggering vocals of singer Dru Brinkerhoff. There’s no irony to anything they do, no wink and nudge to say, “Yeah, look at us, but we don’t really mean it.” They do mean it. Every single time.

And in case you’re wondering, “every single time” comes up quite often. In their short tenure together, Stone Axe have banged out two eponymously titled full-lengths and more splits, singles and EPs than you can keep up with, through labels like their own Music Abuse Records, Roadburn Records, Ripple Music, Hydro-Phonic and RxEvolution Recordings. Reed handles the recording himself and is always writing, so don’t expect them to slow down, either.

The drive isn’t to innovate, but to celebrate. When you listen to Stone Axe, you hear parts that call to mind these heroes of rock and you’re happy. It’s okay to smile. That means you get it. Stone Axe aren’t out to reinvent the wheel, they’re out to keep it round in a world that’s decided it would be better squared off.

But they are looking to the future. With the recent addition of drummer Mykey Haslip and bassist Mike Dupont, Stone Axe is more of a complete band now than they’ve ever been, writing together and working on the next installment of the Stone Axe series.

There are many bands who profess to being in it “for the love.” Many fewer actually are, and fewer even still are bands who are born out of that love, who embody it in sound and mission. In fact, Stone Axe might be it, which is exactly why we need them as badly as we do today.

We live in an age where digital manipulation is so extensive most people can barely tell the difference anymore whether or not someone’s voice has been through a processor, and it’s high time someone came along to remind us that the most important element in creativity is the human element. That’s what Stone Axe has to offer, and if you miss out on it, it’ll be your loss.