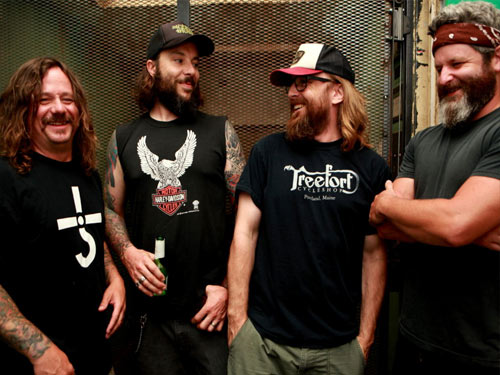 Formed in the mid-’90’s by Craig Riggs and Tim Catz, they raised the bar for riff loving hard rock, proving that the West Coast didn’t have a lock on what most considered “stoner rock.” They released a single on Man’s Ruin, three albums (“$1,000,000,” “Nationwide,” and “Rock n Roll”), a compilation of singles and B-sides (“Taking Out the Trash”), toured the hell out of the US and Europe with the likes of Nebula, Orange Goblin and Scissorfight, and then, like all good bands and unlike too many shitty ones, went on the dreaded “indefinite hiatus”.
From the smoldering ashes sprung a handful of notable groups – the rootsy, Southern lovin’ Antler, the cock rock of Quitter, among others – but while those acts made distinct marks, they never filled the void left by Roadsaw. Other bands that attempted to capture that unique Roadsaw magic fell woefully short. There was attitude or there were riffs, but the two never blended together in that awesome Roadsaw way. For the faithful, the best thing to do was to replay those classic albums and hope for a miracle.
Crack open a cold one and get ready to rock the fuck out, because Roadsaw is back. After a successful US tour in 2005, an absolutely jaw dropping cover of Led Zeppelin’s “When the Levee Breaks” on the latest “Sucking the 70s” compilation, and appearances at both CMJ and South by Southwest, the band has reconvened to record a new album tentatively titled “See You In Hell” which will be coming out in the fall of 2007. The core “Rock n Roll” lineup is back, with bassist Tim Catz, Riggs on vox, guitarist Ian Ross, Dave Unger on keys, and long time friend and fan Jeremy on the Drums. The reinvigorated five-piece has already destroyed one Boston club this year – expect more devastation to come. This is the culmination of every great riff, of every memorable melody. This is the “fuck you” attitude that defines rock n’ roll. This is Roadsaw.