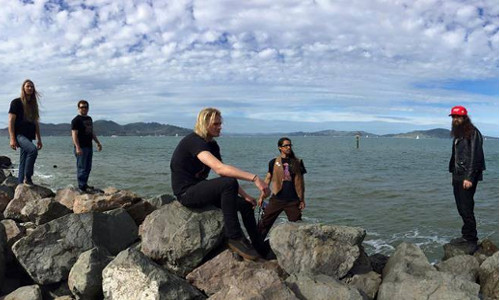 San Diego heavy rockers Red Wizard make their full-length debut with Cosmosis, following-up a 2014 self-titled EP that rounded out with a harmonica-laced cover of Black Sabbath‘s “The Wizard.” That in itself should tell you something about the brazen nature of the band, and in particular, their interest in getting to the roots of what sonic heft is all about.

With the burly dudery of Travis Baucum‘s vocals out front, dual guitars in Miles Von Ricketson (lead) and Casey Lamontagne (rhythm), the bass of David Wilburn and Shane Kepler‘s drumming, they would seem to be arriving at their first album with clearheaded intent — but for all the booze — and what seems like it’s going to be a simple affair on opening track “Tides of War” becomes something much more stylistically nuanced as the record plays out its seven-track/37-minute course, remaining defined in no small part by its lack of pretense as it goes, whether that’s manifest in the proto-metallic three-parter “The Red Wizard Suite,” which closes, or in the more doomed “The Temples of Tinnitus,” which hits earlier. Rough tonal edges give a metal vibe, but the groove is heavy and Baucum‘s voice, though high in the mix here and there, as on “Tides of War,” adds a bluesy undertone that finds fitting accompaniment from his harmonica in the more swinging “Blinded,” which soon enough gives way to the 10-minute title-track; another on the growing list of vibes Red Wizard cast throughout their debut’s span.