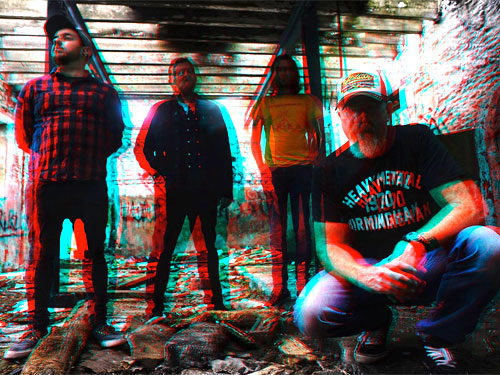 dirty desert rock kebab eating mofos…..
It was summer 2015 when Phil walked into a scruffy bar to watch an equally scruffy band knock out a few scruffy tunes. Scanning the immediate vicinity to see who else was out tonight, a shabby drunken figure barely able to stand but fully able to hold his beer glass leered out of the dark shadows. Enter Dave. Dave and Phil had shared various stages on the same bill over the preceding few years as members of The Drastics and Threshold Shift – filthy bands from a filthy town. Even their own mothers despised the goddamn racket they made and people would cross the street rather than be dragged into some sleazy venue to watch and listen to these fools. It was the obvious thing to do – form a new band. The fact they were both guitarists and didn’t have a bass player or drummer around wasn’t a problem. Both were aware of a local four stringer called Martyn – a scoundrel of the lowest form who had played previously in Chutzpah with Phil and also with Wild Trash amongst others. His pedigree was so poor that he was an obvious fit. Rehearsals began soon with no agenda but more importantly no drummer. Dave could knock out a beat so took to the drum stool for a while. Various percussionists came and went – the diet of alcohol, patchouli incense sticks and kebabs proving too hard to handle for these lesser mortals. Dave knew a beast of a drummer from his days in The Despondents. His name was Scott but few people dared to speak his name. He travelled from the bleak industrial wastelands of Birmingham via the deserts of Pontefract to try out with this fledgling bunch of fools. Initial sessions went well but the guys knew they needed to ask Scott a very important question – how do you like your kebabs? With extra chilis was the response from the bearded one. A match made in heaven then and he joined the family. Rehearsals, gigs, more rehearsals, new material brings us to the present day – NEW ALBUM OUT NOW !