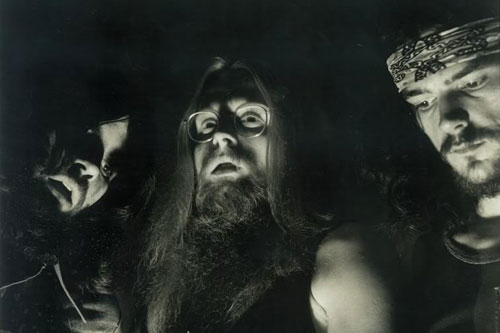 In 1972, guitarist/vocalist Jim Gustafson, like so many young rockers, put together a band. With the help of high school chum and bass player Phil Jones, they searched for and added drummer Glenn Wiseman. The band came to be known as Poobah. Within a few months, Poobah entered the recording studio to lay down the groundwork for what would become one of the quintessential albums in the bands catalog. Let Me In started the mad and crazy rock ‘n’ roll frenzy that would see its continuation to present day. Fusing psychedelic elements of early day Cream with the fuzzed-out guitar heaviness of Black Sabbath, the Poobah debut album soon became legendary, as did Jim Gustafson’s guitar heroics, and the band began its steady ascent to cult status. Let Me In’s strength and the band’s incendiary live shows led to Poobah landing gigs in support of Canned Heat, Judas Priest, Alice Cooper, ZZ Top, Foghat, and many, many others. Despite the line-up change of Wiseman leaving and being replaced by Nick Gligor shortly after the recording of Let Me In, Poobah soldiered on and toured for nearly two straight years.

With a completely new line-up, Gustafson led Poobah into the studio in 1976 to record the bands second LP, U.S. Rock. With the record selling exceptionally well, the bands cult status continued to strengthen, but poor management and the typical industry pitfalls hampered the band from finding the wider success that they so richly deserved. By 1979, Gustafson left the out of town band he was in, and retreated to the friendly confines of his hometown of Youngstown, Ohio, where he reconnected with original bassist Phil Jones. After diligently hunting down a new drummer, Poobah made their way to the recording studio for album number three, Steamroller. Steamroller, over time has become one of the most revered albums from the bands catalog and has seen a resurgence of interest and has been re-pressed numerous times, most recently in 2008.

Ten guitar powered studio albums and thirty years later, Poobah is still at it, playing his distinctive brand of heavy rock to clubs filled with fans, old and new. Over the course of four decades, Gustafson has the distinction of playing the Rock N’ Roll Hall of Fame more than any other musician, and has recently been seen hobnobbing with fellow Youngstown, Ohio native Ray “Boom Boom” Mancini at the movie premier of “Youngstown: Still Standing”, with 5 Poobah songs in the movie(featuring Ed O’Neal from Modern Family). As of 2010, Jim Gustafson has signed on with indie record label, Ripple Music to re-release Poobah’s debut album, Let Me In. This deluxe 2LP and CD re-issue was re-mastered by current underground cult hero Tony Reed (Stone Axe/Mos Generator) and contains a complete albums worth of bonus tracks (and photos) culled from recordings made in ’72 and ’73, some of which have never seen the light of day.