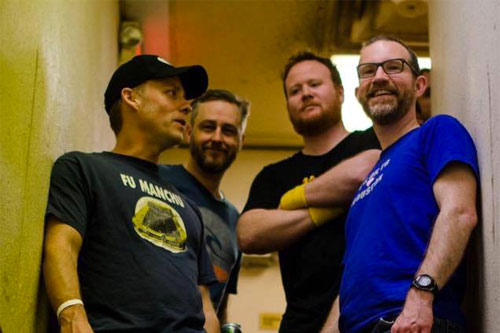 Back in 1995-6, I (Greg) was playing with our original drummer, Dave, mostly coming up with jazzy/heavy groove-based bass and drum jams. We played with a couple of different guitar players, but nothing clicked until we started jamming with Jeremy. We were all from the same small Texas town of Alvin (home of Nolan Ryan), and we already knew each other, as is often the case in small Texas towns.

Jeremy and Justin had been in a band before the Plow formed called Wormwood with a couple of other Alvin guys, one of whom went on to found Dynamite Hack, which ended up releasing Superfast and touring with Weezer. Pretty cool.

In 1997, Justin showed up to practice one day and played us a riff that was so heavy that we had no choice but to let him join the band (that riff eventually became the song Beatdown, which is on our first album).

Once we had two guitars (and two singers, with both Jeremy and Justin contributing to the vocals), everything felt more complete. We started developing our sound and playing around Houston and even out to some other Texas hubs such as Austin and College Station.College_station_gig

In 2000, we released our first album, Head On. We recorded it live in the home studio of Scott Ayers of Houston’s seminal band, The Pain Teens. Almost every song on the album was done in one take. I’m still proud of that first album, and when we play live, a good chunk of the set always comes from it.

In 2003, we released our second album, Cock Fights and Pony Racin’. The name of that album has been the subject of some speculation, so allow me to solve the mystery: Jeremy sent an email full of potential album titles. Among them was “File under Nugent, Ted” as well as CF&PR. When I saw CF&PR I envisioned the cover Cock_Fights_Album_Coverart, and told the guys I would paint it if we went with that name. The rest is history.

In 2005, I decided to change careers and move to Florida to go to chiropractic college. We had been working on some new material and recorded it just before I took off for the Sunshine State. The material on that album, all songs devoted to the characters of Kurt Vonnegut’s books, is called Asteroid 25399, named after the asteroid that is named after Vonnegut. We had our CD release party in December and the very next day I moved to Florida.

While I was away, the guys carried on with Ben Yaker on bass for a few shows. That led to Ben and Justin starting a totally new (and much more metal) band, Sanctus Bellum. SB began to flourish and was in its heyday when I got back from Florida. I was busy trying to open my practice, but Jeremy and I started getting together with a couple of other guys to jam, mostly covers. The Plow got a few shows offered to us, and we got back together to play the old material. Our original Drummer, Dave, played his last show with us in December of 2011.

Dave had other obligations for the next few shows, so we elicited the help of Cory Cousins on the drums. He played for Sanctus Bellum and has some killer chops (Cory has his master’s degree in percussion from Carnegie Mellon). He also has very similar musical tastes, a great sense of humor, and has been a natural fit for the band.Cory_shrine_shirt

Thanks for reading, and keep rockin’.