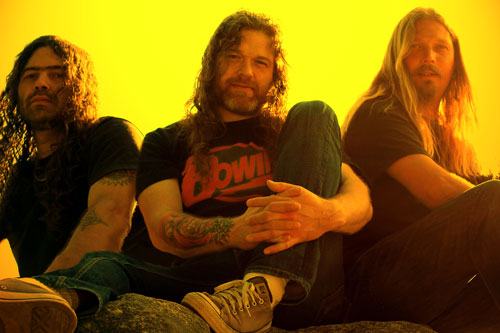 In 2001, the Port Orchard, Washington trio of Shawn Johnson (drums), Scooter Haslip (bass), and Tony Reed (guitars/vocals) emerged from the jam room and studio to the live stage as Mos Generator and began to shake the Pacific Northwest with their incendiary and uncompromising live performances. Between 2002 and 2007, the band four full length studio albums and, in 2008, released a collection of some of Mos Generator’s finest moments by way of “Destroy! The Mos Generator”. By 2008, the band needed a well deserved break to clean up their lives, follow a different muse, and to recharge the energies that make a hard rock band successful.

In 2010, Tony Reed began a relationship with Ripple Music that saw the re-release of the entire Stone Axe catalog, which opened the door to the possibilities of re-launching Mos Generator, and in late Fall of 2011, the long out-of-print debut self-titled Mos Generator album saw its re-release in a grand deluxe package. And, by the time of the re-issued debut album hit the streets, the band had already laid down the basic tracks for their first album of new material in over five years.

In October of 2012, Nomads will be received by a world-wide audience, who will experience an introspective journey into the depths of interpersonal relations, the struggle for soul survival, and the optimistic hope that it will all work out in the end, all performed over the bands trademark sound of explosive heavy dissonance combined with equally beautiful melodic passages.