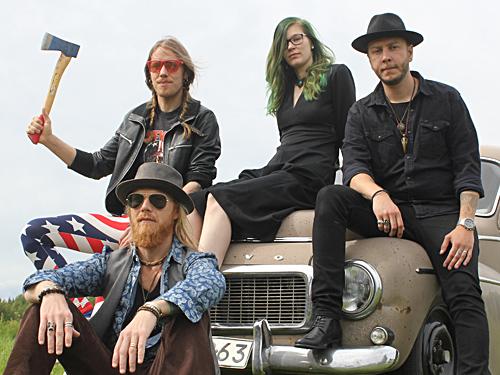 Kingnomad saw the light of day January 2014.
Jay and Marcus – The best of friends and neigbours was often hanging out in the studio in Jay’s basement, jammin on fuzzy Sabbath riffs. One day, one of them riffs turned into a song – Lucifer Is Dead.
With that song, a thought and a purpose followed. The thought – To make music that combined the old 70s sound with nice haunting vocal arrangements, and lyrics that could carry you of to dark and distant worlds. The purpose – To have some fun doing that!
February 24 2017 the seeds of purpose and fun resulted in the debut album “Mapping the inner void”, a heavy psychedelic piece through Lovecraftian landscapes.
That very same year the writing of a new album began. And with the new drummer Mano behind the kit, the new music is soon ready to transport you to the limits of the mind… and beyond.

From the “Crazy Heart Studio” in Jay’s basement in that small forest village in northen Sweden – A never ending stream of occult, psychedelic, progressive, 70s rock is pouring out .
Leaving no soul untouched.