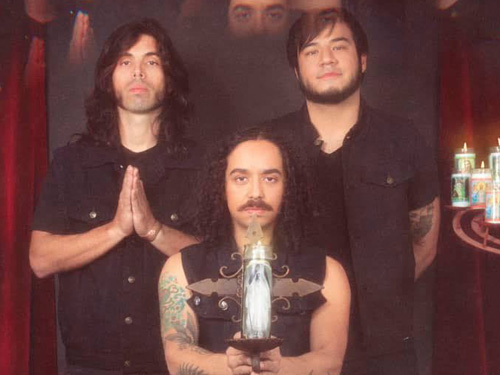 Formed during a Mercury retrograde in Central Texas, the stars were truly aligned when Holy Death Trio began their sacred trip through the sonic waves. Raised on Hendrix licks and Iommi riffs in the land of big skies and southern blues, the band shows both a reverence for the masters that came before them and a drive to carve their own footnote in the history of heavy music. With John P. Rosales’ fiery guitar heroics and the killer, crushing rhythms of Jonathan Gibson and Trey Alfaro their lives shows have already become legendary.
Refining their anthemic songs with an endless series of live shows, Holy Death Trio entered the studio with Producer/Engineer Charles Godfrey (Trail of Dead, Swans, Whiskey Myers) to record their debut full length record.
Hand picked by revered Ozzy bassist Blasko to release their debut album as the first release in his partnership with Ripple Music, the band present here a Texas tornado of high octane rock ‘n’ roll and heavy cosmic beauty. Strap in and hold on tight, Holy Death Trio are gonna take you on a spiritual, riff-fueled trip though the comos that’ll make you wanna bang your head, shake your ass and blow your mind!