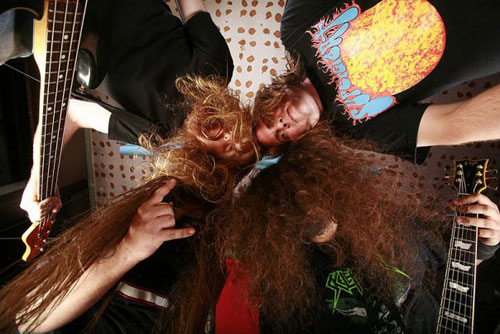 Ten years ago, a new group crawled out from the dank underbelly of the Indianapolis music scene. Ten years later, Devil To Pay have endured ups, downs and in-betweens that would have destroyed most bands. Only a year after the band formed, singer / guitarist Steve Janiak was hospitalized in a drug-induced coma after a medical emergency. During Janiak’s lengthy hospital stay, he was besieged by visions and hallucinations from the ‘other side’. Despite the doctor’s grim prognosis, he survived with a tale to tell. Sure enough, it wasn’t long before the debut album was released: Thirty Pieces of Silver (2003). The retro-inspired, down-tuned heavy sound of the first single “Tractor F’n Trailer” and its video created a bit of a regional buzz and the band hit the road full throttle.

The road that lay ahead proved to be a rocky one: dissolving record labels, a revolving door of rhythm guitar players, tour van breakdowns, and a lack of proper distribution. Devil To Pay persevered, releasing Cash Is King (2006), Heavily Ever After (2009), and 48 Minutes DVD (2009) on their own, constantly building up their legacy through the slow burn of festival appearances, songwriting, wood-shedding, gigs, gigs and more gigs. 2008 saw the addition of guitarist Rob Hough who spurred Janiak, bassist Matt Stokes and Drummer Chad Prifogle on to greater heights.

In 2011, after a ‘mind-expanding epiphany’, Janiak began his quest to understand the link between the normal and paranormal, devouring anything he could find on the subject. Encountering a mix of eastern philosophies, channellers, shamans, quantum physics, the placebo effect, multiple universes and a plethora of ‘New Thought’ ideas, the hidden meanings slowly crystallized and bled deep into Devil To Pay’s lyrical themes.

After ten years of literal blood, sweat and tears, Janiak and his band-mates in Devil To Pay are making the music of their lives. Ten years of soul searching and surviving have led to this new collection of songs, Fate Is Your Muse. This heavy, lyrical journey through the metaphysical realms of consciousness will be released world-wide in early Spring of 2013 through Ripple Music.