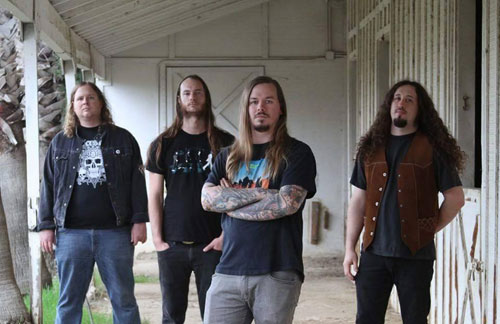 There’s a new sheriff in town by the name of Desert Suns. It seems that bands today are having to do more and more to stand out and these fellas have done just that. Where stoner rock, doom, sludge, psychedelic and blues all overlap you get Desert Suns.

A San Diego band formed in 2013 by four hefty dudes with enough hair to challenge Cousin Itt to a test of anonymity. Soon after forming they released their single “Burning Temples” January of 2014 which helped them to acquire a great fan base and got them some great reviews. “Some of the doomiest riffs that would make one Mr. Iommi a very happy and proud person” says Bill Goodman in his review of the Desert Suns single Burning Temples.

Their debut, self-titled album was released later that year on August 16th 2014 and reassured fans that they were no one hit wonder and also got them enough attention to book gigs all around the city. This attention is much deserved as the band has a genuine fluidity and a fresh take on how we hear rock. Although, the band has the ability to rip out some heavy material that would even get Grandma headbanging, they know how to seduce through gritty americana thanks to well-placed harmonica and purring vocals. From beginning to end, Desert Suns has compelling hooks, an addictive atmospheric energy and heavy, pulsating beats that get blood boiling with obstreperous energy.

And now re-mastered by renowned multi-instrumentalist Tony Reed (Mos Generator/Stone Axe) at HeavyHead Recording Co in Washington, Desert Suns will be released in North America on 15th January on vinyl/CD through Ripple Music and on LP in the UK through HeviSike Records.