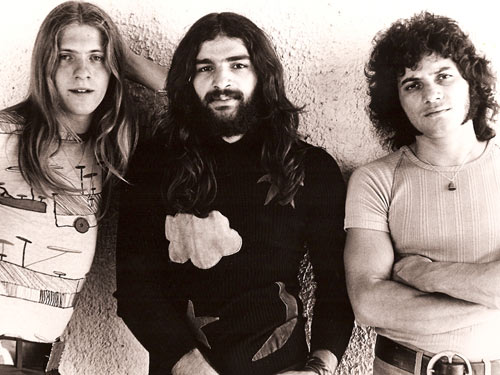 Surely one of the most unsung bands in the history of American hard rock music, BANG released three full-length albums for Capitol Records in the early 70’s, that criminally sank without a trace. Capitol artist development at the time just did not know what to do with the band that was often called America’s answer to Black Sabbath.

BANG‛s first significant break came when the Philadelphia band gate-crashed a Rod Stewart show in Orlando in 1971 convincing promoters to put them on as the warm up act. With the interest of the major concert promoters of the day, East Coast Concerts and Concerts West, the band soon became major contenders in the hard rock arena.

The 1971 self-titled debut album “BANG“ is considered an important forerunner to the early Doom Metal genre. This was followed by the monumental “Mother/Bow To The King” album in 1972 which should have exploded. Changes in personnel at their record company and an externally forced line-up change led to frustration and bewilderment before releasing their swansong 1973 album “Music“.

Undoubtedly the heaviest of America‛s ‘proto-metal’ bands from the period, BANG also had a strong sense of melodic power, which should have led them to much bigger things.

Highly regarded as a cult act by many for years, it‛s now time for this truly amazing rock band to be enjoyed by a new audience. As can be heard, the versatility and songwriting skills of BANG were (are) second to none.