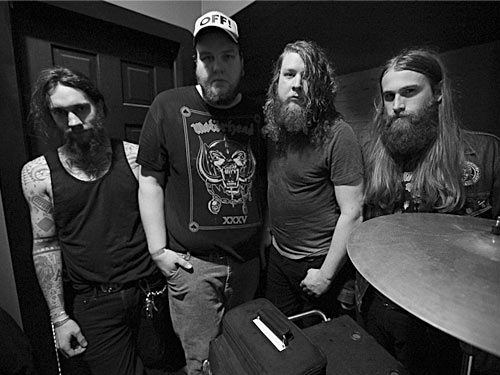 Living up to the title of their newest record, Against the Grain have proven themselves to be true warriors of the road. Blazing through the US with their brand of gear-shifting balls-to-the-wall music that incorporates all things heavy – ATG defies categorization as they seamlessly blur the lines of punk, rock, doom and thrash.
With the release of their first self-titled full-length in 2009, ATG was an immediate hit – garnering an intensive local fanbase playing 50 shows throughout Michigan. With their intense live show and energized fanbase they were introduced to touring life by Hellmouth and The Meatmen, and began their transformation into a fully-functioning road act. The boys in ATG have yet to look back.
After 75 dates in 2011, ATG followed up with 2012’s Motor City Speed Rock and 150 dates in support. Their efforts caught the attention of Self-Destructo Records, who in 2013 released their 3rd full-length,Surrounded By Snakes to such acclaim that they re-leased Motor City Speed Rock on 10” as well. Maintaining a DIY tour ethic, ATG built a national fanbase with their bare hands – quenching the thirst for fast and heavy rock and roll throughout the land. With 650 dates and counting since hitting the road in 2011, ATG has also toured alongside an impressive assemblage of notable acts including – Nashville Pussy, Valient Thorr, Church of Misery, Guttermouth, The Meatmen, The Koffin Kats, Voodoo Glow Skulls, Bongzilla, Atomic Bitchwax, Night Demon, Black Cobra Zoroaster, Hellmouth, The Hookers, Beast in the Field, Lo-Pan and shared the stage with Zeke, St. Vitus, Orange Goblin, Electric Frankenstein, Agent Orange and many more.