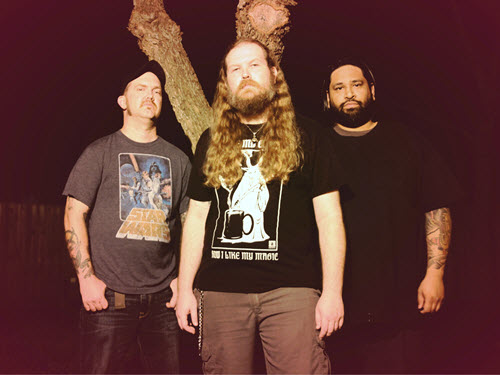 Bloodshot eyes glare from underneath a weathered brim, staring across the sun-baked ground and rolling tumbleweed. The bleached skull of a bull lies half-buried in the gravel like an omen. Revenge looms in the distant township. Violence awaits. Such has been the words used to describe the music of Texan power rocking, fuzzed out stoner blues trio, Switchblade Jesus.

Their sound is as dirty and dusty as a weathered Harley bar. Their metal as rusted and grease-soaked as an aged motorcycle chain. Their rock as vicious as a pissed-off Rattler. Their edge is borne of necessity, calling Corpus Christi their hometown, a city with twice the violent crime as the rest of Texas. An area so dangerous that rumor has it that even Jesus has to carry a switchblade.

Comprised of three integral parts: Eric Calvert – Guitar/Vocals, Jon Elizondo – Drums, and Chris Black – Bass, Switchblade Jesus have set out to create the mandatory soundtrack for your roadtrip through the deserts of Hades, hitting 666 mph in a beer-fueled Dodge Challenger ’69 and embarking on a brain melting hellride through space and time accompanied by three massively talented Texans and a case of Lone Star Beer. They have already torn apart the stages of SXSW, Chaos in Tejas, The Reverend Horton Heat Fest, and the Borderland Fuzz Fiesta, having shared the stage with the likes of Gwar, Orange Goblin, Kylesa, Black Tusk, Ghoul, Cro Mags, Mothership, Wo Fat, Valient Thorr, Jake E Lee, Rev Horton Heat, Supersuckers, DRI, and Honky.

Beware, Switchblade Jesus are heading to your town, and nothing will ever be the same again