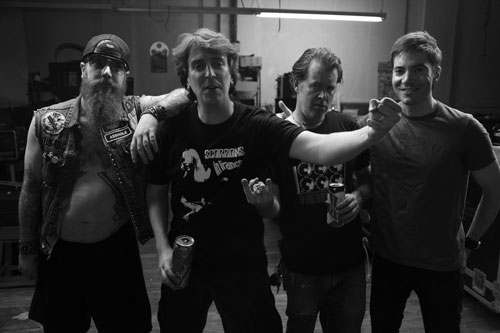 Mighty High, Brooklyn’s #1 regressive rock act, will be releasing their new album Legalize Tre Bags on June 12, 2012. 11 kick ass songs bashed out in 34 minutes and containing over 30 references to getting high. Most people are unfamiliar with the term “tre bag” these days but at one time you could actually score a $3 bag at all the best dope spots in the Bronx. Mighty High feel that the tre bag needs to not only come back, but be legalized allowing people an affordable escape from reality. Fans of the band’s trademark “Black Flag Railroad” sound will be impressed with their expanded sonic realm which now includes the influence of The Rods, Blackfoot, D.O.A. and Nazareth. The opening song and first single “I Don’t Wanna Listen To Yes” is a statement that the world has needed to hear for several decades. The album takes you through all 5 boroughs of New York City (“Come On! I’m Holdin’”), explores the life and tragic death of David Carradine (“Tokin’ N Strokin’”), the failure of Nancy Reagan (“Drug War”) as well as the usual topic of weeed pinching deadbeats.

Recorded and mixed with noted engineer Jason LaFarge (Swans, Khanate, Chica Libre) at his Seizures Palace recording studio in Brooklyn, and then mastered by Tony Reed at HeavyHead in Port Orchard, WA, Legalize Tre Bags has finally captured Mighty High’s deafening live assault properly. Many of the guitar tracks were played through a special 4×12 speaker cabinet covered in white shag carpeting that was previously owned by Foghat in the late 1970′s. The front cover illustration was once again supplied by Wayne “Braino” Bjerke, who got his start in the early 1980′s painting denim vests, specializing in Maiden, Zeppelin and Rush but would do the Jerry Garcia Band for cash in advance. Legalize Tre Bags is a joint release between the band’s home grown label Mint Deluxe Tapes and California’s Ripple Music (Stone Axe, Grifter, Iron Claw, Poobah) and is available on CD, download and deluxe gatefold LP.

2012 also marks the 10th anniversary of Mighty High’s formation. A power trio trapped in the body of a quartet, the band was formed in 2002 by guitarist/vocalist Woody out of sheer necessity. Mighty High existed as a band name, concept and denim jacket long before a single note of music was ever played. In fact, when Woody came up with the band name he couldn’t even play guitar. After years of bragging how great his band would be, his friends challenged him to put up or shut up and Mighty High was born. After several line up changes, the fourth incarnation of the band heard on Legalize Tre Bags is by far the most potent. Powerhouse bassist Labatts Santoro joined in early 2010 to form an unholy rhythm alliance with long suffering drummer Jesse D’Stills. The final piece of the puzzle arrived in the shape of stun-guitarist Kevin Overdose.

Legalize Tre Bags is the long awaited follow up to 2008′s …In Drug City, which received rave reviews from Julian Cope (“surfs the tsunami thrown up by AC/DC’s Let There Be Rock-period as though redirected through Grand Funk”) and Classic Rock Magazine (“Positively relentless and gorgeous in its shameless vulgarity. Awesome.”). Since the release of …In Drug City, Mighty High released the two song Drops A Deuce 7″ single in 2009 on Mint Deluxe , a split 7″ with Stone Axe on Ripple Music and contributed a song to the double 7″ Ripple compilation Heavy Ripples with fellow regressive rockers Grifter, Stone Axe and Sun Gods In Exile. Future plans for 2012 include many live shows supporting the release of Legalize Tre Bags and new songs are already being written for the next record.