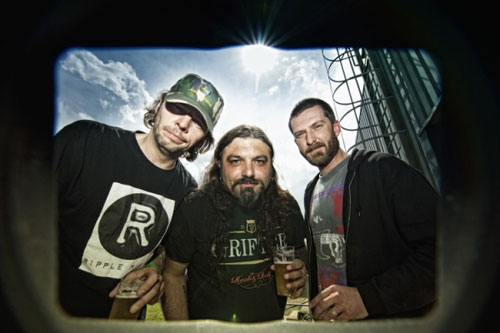 What is best in life?

To crush your enemies, see them driven before you and hear the lamentations of their women.

WRONG!!! What’s best in life is rocking and that’s what Grifter does best!!!!

Originally formed at the tail end of 2003 out of the ashes of twoPlymouthbands four guys set up base in a grotty rehearsal room and started to make a noise. Bassist Phil, Drummer Foz, Guitarist Ollie and Vocalist Nev jammed a few riffs and pretty soon had a set so they got themselves a gig…they played the gig…then Nev walked off stage and left the band!!!

Fast forward one month and Grifter were back on the same stage with Ollie taking over the vocal duties and the newly inaugurated three piece have never looked back. The last 7 years have certainly been a hell of a ride!!!

Almost immediately the band started working on their first recordings using Foz’s newly acquired 8 track recorder. Tentatively titled “The Therapy Room Sessions” these recordings sounded pretty good for a first attempt but took so long to complete that in the meantime a whole bunch of far superior songs were written so the recordings were shelved, eventually turning up on the internet for any curious onlookers to check out. In the meantime Grifter continued to play around their hometown and build a local following which proved to the band that even in the hideous emo/metalcore ridden musical environment of the time people still had a soft spot for good, honest, kick ass, fuzzed up, grooving rock and roll!!!

Roll on 2005 and Grifter start to spread their wings playing further a field in places like Bristol, Bath and Sheffield and the band realise there is a whole world out there for the taking. Dusting off the 8 track once more the band start to record a whole bunch of new tunes of which three songs make it onto the first official release, The “Elephantine” demo. For a home recording this demo picked up a number of very favourable reviews and came to the attention of Fury 76 Records who offered the band a deal to record an EP.

2006 rolls into view…more gigs and the recording of the “High Unholy Mighty Rollin’” EP. Word has spread and the majority of the bands’ gigs now take place outside ofPlymouth. The general rule of thumb is, and remains to this day, if there’s a PA, a couple of spare plug sockets and Guinness on tap we’ll play!!! Gigs continue right through 2006 and into 2007 where the band comes to the attention of Catacomb Records who offer the band a slot on their forthcoming “Sound Of The Catacombs” compilation. This proves to be a match made in heaven as band and label strike up a close friendship. After a live session recorded in a local studio Catacomb seem like the obvious choice of label for the band to approach about a further release…and they say yes!!!

2008…more gigs all over the country including an all dayer at the Camden Underworld alongside the likes of Gentlemans Pistols, End Of Level Boss and Cherry Choke. Eventually, after two years wait the “High Unholy Mighty Rollin’” EP sees a release through Fury 76 and receives some amazing reviews but by this point Grifter are already looking ahead to the next release on Catacomb Records, an EP to be entitled “The Simplicity of the Riff is Key”…a mantra maintained by the band since day one. The following year sees Grifter continuing to rack up the miles on the asphalt with more and more gigs around the country including support slots with Roadsaw and Orange Goblin.

And that brings us kicking and screaming into 2010. The new EP was been released and has picked up amazing reviews across the board so far. The band also completed their first full tour in the company of Small Stone recording artists Sun Gods In Exile culminating at the inaugural Loud Howls festival inLondon. What does 2011 hold…who knows? Grifter have been approached by awesome new label Ripple Music to contribute a track to a split vinyl release entitled “Heavy Ripples” alongside Sun Gods In Exile, Stone Axe and Mighty High. Ripple Music will also be issuing the first full length, self titled album by the band in the summer of 2011 featuring 10 kick ass rocking tunes and one surprise acoustic blues. Whatever else happens in the future, it will rock and it will be righteous!!!!