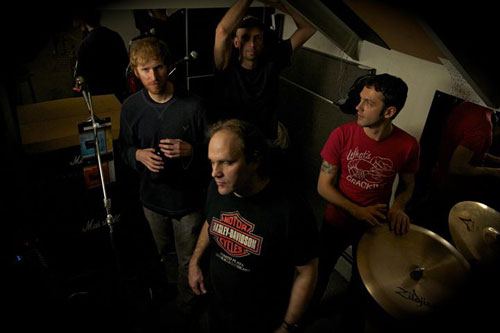 Nestled in the mountain shadows of Nelson, British Columbia, Fen was born out of necessity as much as for creative expression. In 1998, the two reclusive personalities of guitarist/vocalist Doug Harrison and guitarist Sam Levin stumbled into each other’s presence, and rather than speak, they cycled riffs from opposite corners of the room. Between them they discovered a musical vision that greatly differed from that of the dreadlocked locals. What they heard was dark and brooding, at times ominous and creepy, a rock derivative plagued by complexity and a desire to evolve.

Fen displaced to Vancouver where they found a rhythm section, and over the next decade they released three albums: Surgical Transfusion of Molting Sensory Reflections (2000), Heron Leg (2003), and the critically acclaimed Congenital Fixation (2006). In 2009, the band was holed up in Creative Studios, laying down tracks for their fourth album, a haunting collection of lullabies, epic tales, and emotive ballads, called Trails out of Gloom.

During the creation of this long-awaited recording, indie label Ripple Music approached Fen to form a partnership. Signed in January of this 2010, both parties worked hand in hand to release Trails Out of Gloom on July 13th to rave reviews from the press and fans alike. The band is currently working their live shows to promote the new album.